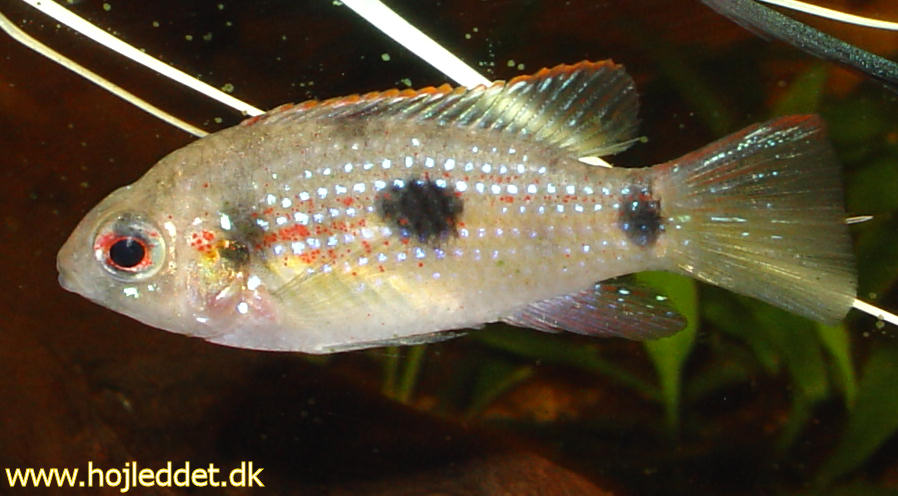 A picture of the african butterfly cichlid, anomalochromis thomasi.

A picture of the african butterfly cichlid, anomalochromis thomasi.

I bought a pair of the African butterfly cichlid in 2004, when I had an idea of having a central African tank with Egyptian mouth brooder, P. kribensis, red jewel cichlid and other species like those, but I never managed to get that far. My experiences with the A. thomasi are somewhat limited, but it's a hardy little fish, which in general are very peaceful and doesn't bother it's tank mates.

The tank should be decorated with some flat rocks that can be used for spawning subfaces. It is also important to have lots of hiding places, like caves, roots and pots. You can also have plants in the tank, as this cichlid rarely digs and they like the cover from the plants.

Normally this kind of cichlid, will form a pair and when they are in good feeding condition, they will spawn without much effort from the aquarist. Unfortunately, I never saw any signs of spawning with this species in the first run. The 2 fish I had could easily have been of the same sex.

That was the main reason for purchasing 6 more in 2006. I hoped that those 6 would produce a pair that would spawn, and then I could sell the remaining 4. I actually think that there was 3 males and 3 females, but I wasn't quite sure.

As time goes by, plans change and I ended up selling all of them when I gave up my plan for the African tank. Since then I haven't had room for them, but it is a fish I would like to try again sometime.

Another picture of the african butterfly cichlid, anomalochromis thomasi.

image: Another picture of the african butterfly cichlid, anomalochromis thomasi.